I honestly don’t find anything more comforting than a big bowl of oats for breakfast.  I started my fitness journey eating variations of oatmeal (and pancakes and French Toast) just about every single day and always found myself sad, scraping my bowl when my oats were all gone.  I’m no stranger to licking my bowls either.  One thing I love about oatmeal is that it’s extremely versatile and you can flavor it virtually any which way you like.  Feeling fruity?  Throw in some berries or bananas.  Craving something more warm and savory?  Use cinnamon and pumpkin.  Want something really dessert like?  Add some crushed up cookies and a scoop of ice cream (YES, oatmeal is freaking delicious with ice cream)!

While I normally eat a huge egg scramble for breakfast now out of sheer laziness and habit, every now and then when I have some extra time or I prep a few breakfasts at the beginning of the week, I like to go ALL out with some oatmeal.  I don’t do it often, but you will sometimes see me create something totally out of the box.  Last month, I got an itch for a huge bowl of oats, I wanted something entirely decadent, and I was craving some chocolate-y goodness.  My shipment of SquareBars also happened to come in so obviously I had to put those to good use (especially since I had been out for quite some time) AND I have been obsessed with Emmy’s Organics Chocolate Sauce lately as well. Coconut, chocolate and more chocolate… yup, sounds like a brilliant plan to me.

I ended up really going the extra mile and decided to prep a big batch of “German Chocolate Oats”.  I could eat one immediately that was warm and fresh, then eat the second serving a couple of days later (overnight/cold oats are AMAZING and are just as good the following days when the flavors really get to merge together)!

Simply put, these oats were rich, bursting with flavor and texture, and absolutely FILLING!  I still felt sad when my servings were gone, but also felt completely satisfied and ready to attack my day with a big bang and a TON of energy!!!  The bits of rich, melty SquareBars, coconut, and nuts added a nice little burst of texture here and there and the Emmy’s Chocolate sauce  rounded out the its decadence! 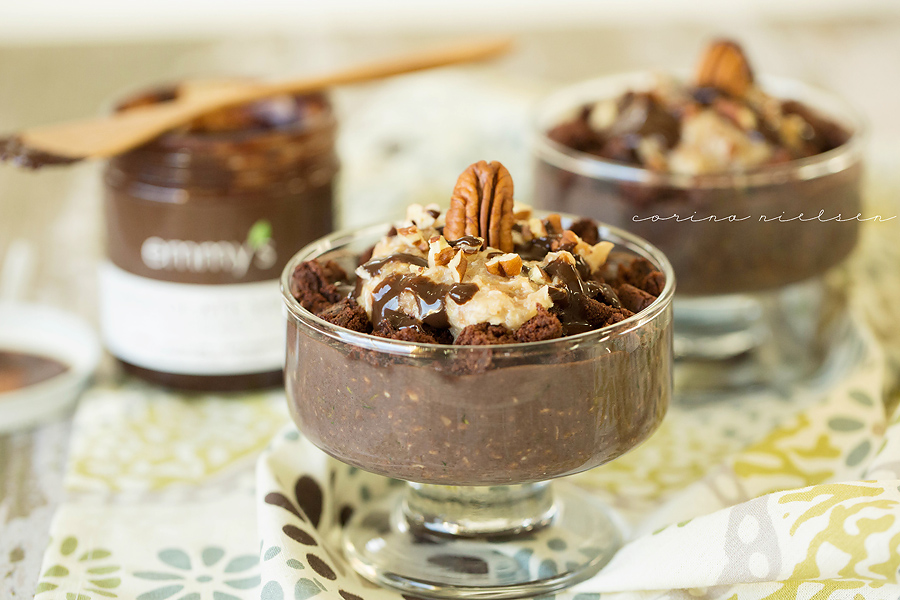 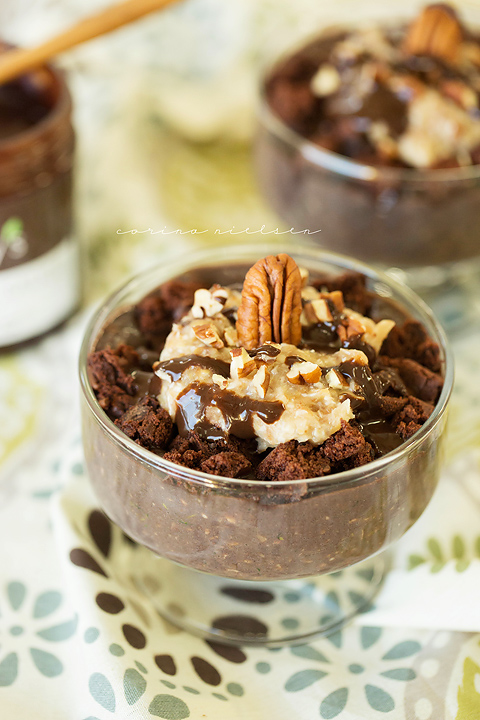 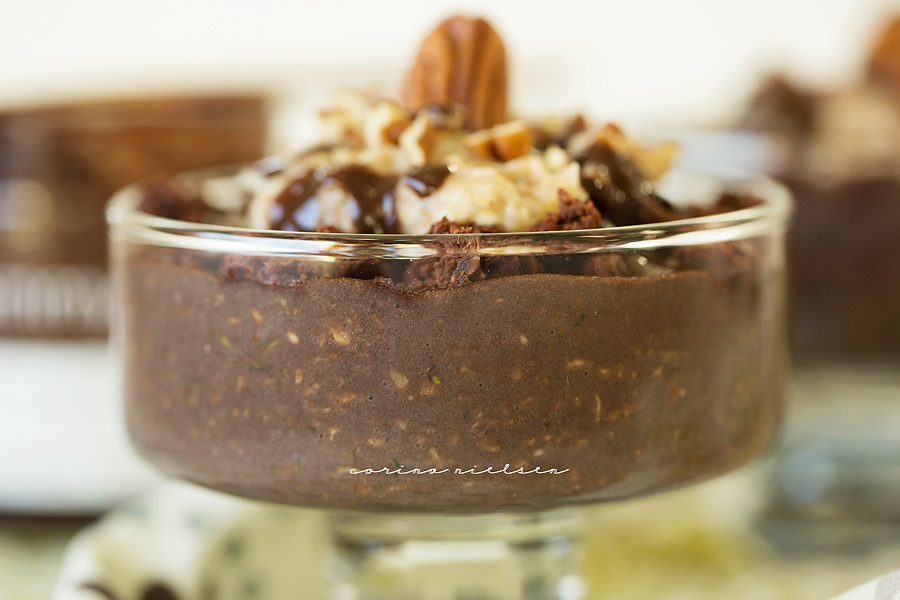 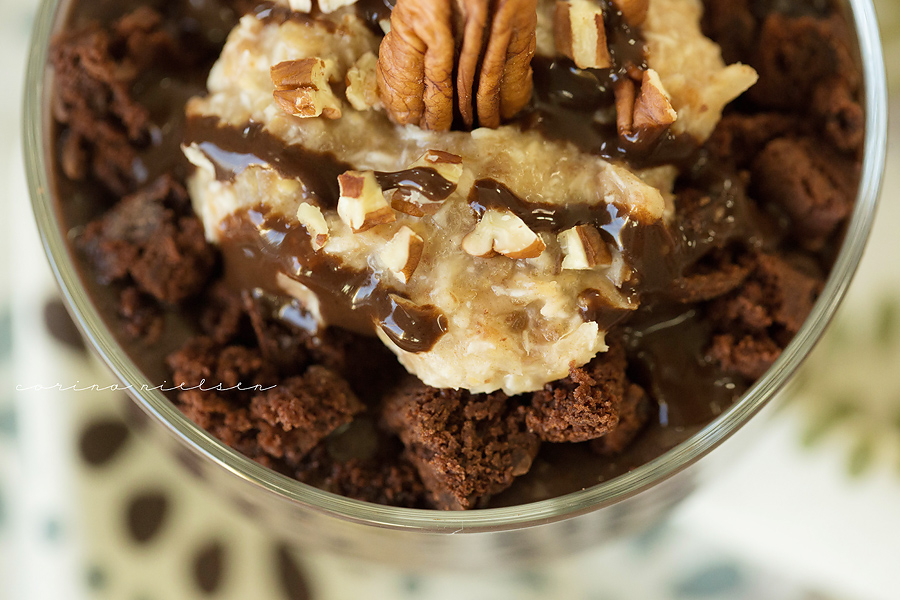 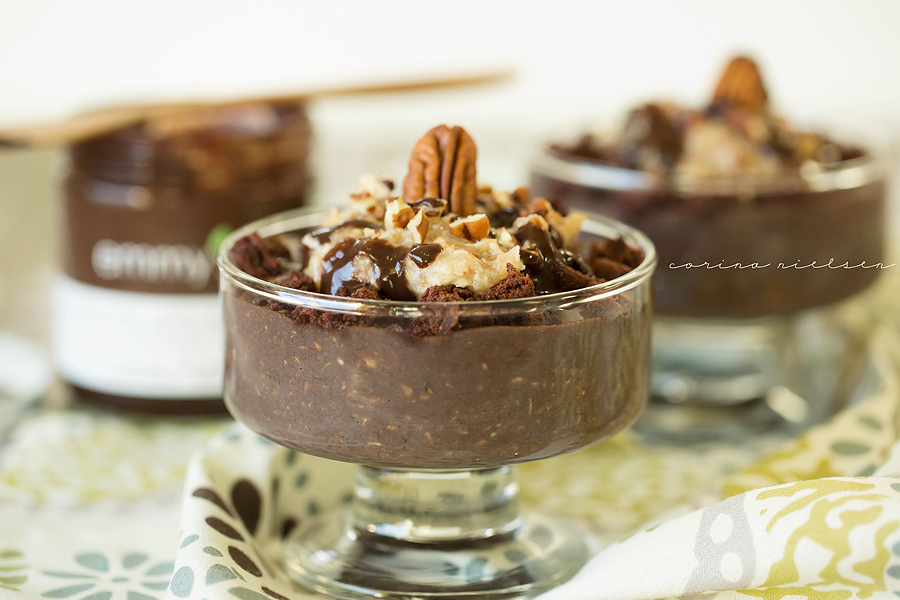 One thing I did with my oats shown here that I don’t show in the printed recipe was add 1/2 of a medium zucchini that was finely shredded.  I actually usually do this with my ALL of my oatmeal bowls to create more VOLUME (volume=more food for not a lot of extra calories=a very happy me).  Basically you just grate the zucchini and then add it to the pot when you are cooking your oats (oats, flavorings, liquid).  One extra step for the grating, but entirely worth it to make double the amount of oats you are eating, you get some micronutrients in with some veggie action, AND you won’t even know they are there.  Genius.  Protein packed and nutrient dense… this is a winner!