Let me preface this post by saying many chronic pain sufferers are NOT going to like what I have to say, but I’m going to say it anyways because its MY truth…

So I decided very very early on in my medical journey that prescriptions and all the crap doctors want to shove down people’s throats was NOT the path I wanted to take.  When I was first diagnosed with my spinal disease, I spent at least 2-3 months trying every single drug that I was prescribed.  Because doctors and my insurance have NO idea what to do with me and are not willing to send me to someone who can help me (thanks for that Kaiser), all I got from my team of doctors was “Do you want to try this med?  How about we try this instead?  Have you thought about taking this?”.  Narcotics, opioids, medication thats not even FDA approved for my medical problems, and even anti depressants were not only prescribed BUT encouraged.

However, when you’re living with chronic pain daily we become so extremely desperate to try anything and everything that’s thrown at us.  If there is even the slightest chance of relief in sight, most people in our positions leap at that hope.   I know for certain I initially did, but after about the 5th or 6th pill popping attempt I realized prescriptions were not for me (at least at this time).  Everything I was given to help alleviate pain & symptoms either #1 made me sick/feel worse, #2 gave me HORRENDOUS side effects which became a domino effect with needing other medications, and/or #3 didn’t provide ANY relief anyways.  What’s the point?  So, I tossed out everything I was prescribed.  Well, more or less everything…

Once all the prescription crap was out of my system and I was truly back at square one, I made a very conscious decision that I would take a 100% natural approach to treating & coping with my spinal disease and all of its effects.  To this day, I can say it in my heart of hearts it was the absolute BEST decision for ME.  The brain fog cleared, I wasn’t relying on having pills on me at all times, I was no longer depressed, my anxiety reduce, and I had way more energy and enthusiasm to get ‘better’.  My natural supplement regime was slowly built and I ended up finding a combination that not only helped with my pain & symptoms, but it’s also enabled me to increase activity and exercise intermittently these past six months.

While flare ups continued to occur, they were becoming less frequent and the duration was also drastically reduced.  Prior to this past February my flare ups would last 7 to 10 to even 30 days at a time.  I was almost completely bed/couch bound except for a few choice activities like my daughters volleyball practices, tournaments, light shopping, and eating out with the family.  The rest of each and every single day was spent laying on the couch or in bed.  I still had to plan my entire week around activities that were important to me.  Post February though, flare ups began to only last 1-2 days, sometimes 3-4.  HUGE improvement and again… without ANY prescription drugs.

Unfortunately I got a little too confident in my activity ability the past couple of weeks.  Not only was I weight training, but I had a ‘great’ idea to try and do a little high intensity cardio as well… AND try it on back to back days LOL.  Totally stupid and irresponsible of me, I know.  I should have known better but when you absolute LOVE exercise as much as I do and the spark is ignited, its easy to turn a blind eye.  I took the risk and am now paying for it dearly.

However unlike the other flare ups I’ve had the past six months, this one hit me HARD.  It honestly felt like I had the flu where every single inch of my body hurt.  I ached, I had sharp pains, I had full body spasms.  Every single movement was painful, breathing hurt, and all I wanted to do was lay down with my eyes closed.  Each and every single one of natural supplements was taken like clock work and I still had very relief for this flare up.  What do you do when you are beyond desperate (and crying while crawling on the ground)?  I caved and attempted to take one of the prescriptions I held onto.

What a HUGE mistake that was!  Welcome the domino effect of prescription drugs.

Pills popped, minor pain relief given (which I’m thankful for of course), but then the rest of my body was completely out of whack.  Brain fog, I immediately felt moments of sadness and anxiety, further lack of energy, my stomach was KILLING me (so much so that I had to contact my primary doctor), bowels weren’t working properly anymore (so I had to take stool softeners which lead to not so pretty things to discuss with strangers), and I just didn’t feel like my happy/positive self.  And this was ALL from taking one of my prescriptions.  I cannot even imagine what it would be like popping those AND the multitude of drugs most TC and other chronic pain sufferers take.  Its no wonder why one ailment leads to another and then to another.  I don’t think of the organs, muscles, joints, and bones separately in the body, I think of our entire systems as a whole.  If one area of the body is effected, compensating areas are as well.

Aside from the immediate side effects though, my concern is also with future health and wellness.  These prescription drugs are HARD on the body despite what most doctors will tell their patients.  In addition, how many FDA approved drugs have been released only to be taken off the market?  Can you imagine how many people were put at risk and developed life long side effects from these once “safe” drugs?  I’m convinced they mess with our chemistries, our brains, our emotional stability, and our organs.  I won’t even get into drug addiction here.  Once you start relying on these medications EVERY single day, it’s virtually impossible to stop once you have become so accustomed to taking them so regularly (despite the dent of relief they may provide anyways).  It’s one thing taking medication when things are absolutely unbearable, when nothing you do alleviates pain & symptoms, but I’ve seen far too many people rely on these drugs EVERY. SINGLE. DAY. And the kicker… they are STILL in extreme pain.

As with fitness, my goals have always been about long term health.  Taking 3-10 prescriptions (one for this, one to alleviate the side effects for that, and so on), it’s just not my path.  Last week when I made the decision to take something only proved to me that my gut instinct was right (for ME).  I have no idea what the future holds, where my health will be next week (let alone next year or 5 years from now), but for now… I’m officially back to an all natural approach!  It’s worked amazingly well the past 7 months, far better than ANY prescription drug I was given!!!  I took a stand, made a decision, and am thankful where my path has led me thus far!

Here is some food for thought:

And just for fun even though I WHOLEHEARTEDLY believe it… 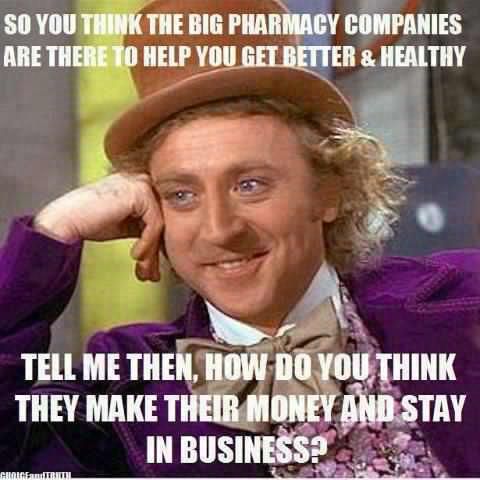 One of my BIGGEST regrets